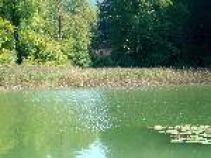 The Ermitage Arlesheim is the largest English landscape garden in Switzerland. The complex boasts natural features such as the romantic Gobenmatttal Valley and the castle hill with its caves and caverns.
Existing buildings like the Birseck Castle ruins, the mill, the tobacco tamping and the gunsmith, are also essential elements of the romantic garden. The three ponds were formerly used for fish farming. By utilizing a system of paths, scenic points, squares, small buildings and monuments, and skillful logistics of trees and shrubs, and creating visual axes, a garden that seemed close to nature, yet designed at a high level was created at the end of the 18th century. It has been preserved in its essential form to this day. A walk through the garden conveys many different impressions and moods, and awakens images of a world of legend, a life of piety and the romance of the knights. This is the Apollo Grotto and the Proserpinagrotte, the Waldbruders Hermitage and chapel, and the ruins of Birseck Castle with battlements and pinnacles.

After its opening in 1785 and through the following century, the Ermitage Arlesheim was frequently visited by poets and painters as well as by high-ranking personalities. As a result, there are numerous descriptions and artistic representations of the garden. It also became a model for later romantic gardens.

The Ermitage Arlesheim Foundation and Birseck Castle own the garden and the farm and are responsible for their preservation. Maintenance is provided by the Werkhof of the municipality of Arlesheim. The hermitage garden and the castle ruins are listed as historical monuments. The pond area is protected by nature. The garden is open to the public at any time.
In 2006, the Schulthess Garden Prize was awarded by the "Schweizer Heimatschutz" (Swiss Homeland Preservation) to the Ermitage and Schloss Birseck Foundation.
The Waldbruders Hermitage is temporarily closed.

Literature on the Ermitage: