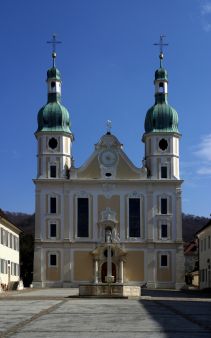 The cathedral
Completed in 1681, the church was remodelled in the rococo style in 1761 along with the construction of the pipe organ. The frescoes inside the cathedral were painted by Josef A. Appiani and the ornate stucco details were done by Feichtmeyer. The pipe organ was built by Johann Andreas Silbermann from Strasbourg.

Birseck Castle
Temporarily owned by the Bishops of Basel from 1239, the castle was destroyed during the earthquake of 1356 and subsequently rebuilt. In 1793, revolutionaries looted and set fire to it. In 1812, Birseck Castle was partially rebuilt: the round tower, the fortress, the castle chapel and the knight's hall with its neo-Gothic paintings. The menu of the medieval Birseck Castle offers an insight into the past. The castle can be visited from mid-May to the end of September on Wednesdays and Sundays from 14:00 - 17:00.

The Ermitage
A historic landscape garden that includes the ruins of Birseck Castle, caves, ponds and a hermitage. It was built in 1785 by Domlord Heinrich von Ligerz, Freiherr Franz Carl von Andlau and Balbina von Staal. The Ermitage is also a nature reserve. A walk through the Ermitage is a special experience at all times of the day and seasons (photos).

Reichenstein Castle
The castle collapsed during the earthquake of 1356 and was rebuilt in 1933 by private initiative. Today, it is owned by a non-profit foundation. The castle can be rented for events. (Vermietung)

In the centre of Arlesheim, (photos) you can find the former Trotte which is now the local museum, and the old cemetery where the Odilienkirche used to stand. On the opposite side, the Gasthof Ochsen, first mentioned in 1692, invites you to have a fascinating visit. On Andlauerweg 15 stands the noble “Andlauer Hof,” the residence named after Franz Karl von Andlau, who moved from Birseck Castle to the village to become the bishop of Burgvogt. The farm which includes a large barn covered by a hipped roof from 1822 is part of the Andlauerhof. At the upper Lane 10, we find the former “Suryhof” which today houses Sonnenhof, a children's home. Beside it is the Badhof, built in 1820 by Viktor Sury, once a bathing spa house, now a residential building.